Community Event: The Book of V 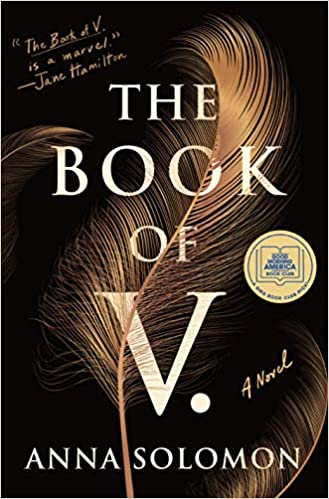 The Zoom link will be email to registered participants on Weds. afternoon 2/17, and again on Thursday, 2/18 at 4 pm.

The Purim story of Esther is often told as the triumph of a Jewish minority over one man’s blinding hatred, through the courage and selflessness of one woman. Anna Solomon’s The Book of V. challenges this simple narrative — asking, what is Vashti’s story? And how do we choose to represent women’s lives, both in the past and today?

The narrative alternates between the historical Esther’s perspective, Vivian, known as Vee, a 1970s wife of a senator, and Lily, a modern-day Brooklynite, second wife, and mother of two. Each of these women’s lives is constrained by the expectations of a patriarchal society. Vee enjoys her socialite life but is plagued by her husband’s past and her own insecurities when she compares herself to her peers; Lily is haunted by the memory of her husband’s first wife, and cannot relinquish feelings of ineptitude towards her domestic duties and her marriage.

The Book of V. explores the idea of people living on the margins — geographically, socially, and economically, and offers new interpretations of the story of Esther.

The JCA is a member of the Jewish Book Council network.

The Book of V.: A Novel (Hardcover)