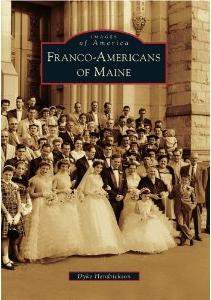 Journalist Dyke Hendrickson has written a remarkable book that highlights the influence and cultural heritage of Maine's many French-Canadian residents.

Nearly one-third of Maine residents have French blood and are known as Franco-Americans. Many trace their heritage to French Canadian families who came south from Quebec in the late 19th and early 20th centuries to work in the mills of growing communities such as Auburn, Augusta, Biddeford, Brunswick, Lewiston, Saco, Sanford, Westbrook, Winslow, and Waterville. Other Franco-Americans, known as Acadians, have rural roots in the St. John Valley in northernmost Maine. Those of French heritage have added a unique and vibrant accent to every community in which they have lived, and they are known as a cohesive ethnic group with a strong belief in family, church, work, education, the arts, their language, and their community. Today they hold posts in every facet of Maine life, from hourly worker to the U.S. Congress. These hardworking people have a notable history and have been a major force in Maine's development.

Dyke Hendrickson is a journalist who has been a writer and editor for newspapers in Biddeford, Portland, Waterville, and Bangor. He won a feature-writing award for his series in the Maine Sunday Telegram titled "The Franco-Americans" and later wrote the book Quiet Presence: Stories of Franco-Americans in New England, which has been excerpted at the Museum of National Heritage at Ellis Island, New York.