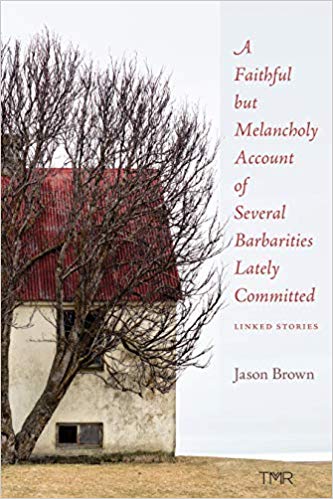 Jason will be reading from his collection of linked stories set on the Maine coast.

From the publisher:
The ten linked stories in Jason Brown's A Faithful But Melancholy Account of Several Barbarities Lately Committed follow John Howland and his descendants as they struggle with their New England legacy as one of the country's founding families and the decaying trappings of that esteemed past. Set on the Maine coast, where the Howland family has lived for almost 400 years, the grandfather, John Howland, lives in a fantasy that still places him at the center of the world. The next generation resides in the confused ruins of the 1960s rebellion, while many in the third generation feel they have no choice but to scatter in search of a new identity. Brown's touching, humorous portrait of a great family in decline earns him a place among the very best linked-story collections: James Joyce's Dubliners, Sherwood Anderson's Winesburg, Ohio, Alice Munro's Beggar Maid and Denis Johnson's Jesus' Son.

"Jason Brown’s A Faithful but Melancholy Account of Several Barbarities Lately Committed is, to say it simply, one of the best collections of linked stories I have ever read by anybody, at any time. One by one, these stories are riveting. When you finish the entire book, you will be shaking your head at their collective power. What a writer. What an artist."
Steve Yarbrough, The Unmade World and The Realm of Last Chances

Jason Brown grew up in Maine. He was a Stegner Fellow and Truman Capote Fellow at Stanford and now teaches in the MFA program at the University of Oregon. His stories have appeared in The Atlantic, Harper's, Best American Short Stories, The Pushcart Prize Anthology, NPR's Selected Shorts, The Missouri Review, and other places. He has published two story collections, Driving the Heart (1999) and Why the Devil Chose New England for His Work (2007).