Poetry: Doors Out of the Underworld by Scott Withiam 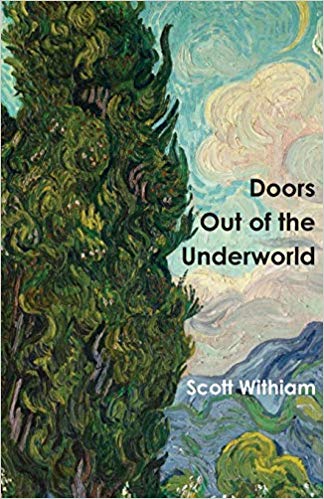 Doors Out of the Underworld by Scott Withiam

Scott will be reading from his newest collection Doors Out of the Underworld.

Withiam’s prose poems read like modern fables, and his lyrical poems are rich with personal and animated voices. Both styles sometimes mix. Many of the poems in Door Out of the Underworld are obviously anchored by concerns and characters from antiquity, as the title suggests, but all of them are concerned with probing or questioning everyday life in the moment.

In Scott Withiam's Doors Out of the Underworld, marvelous things occur: a pear talks to a man and a woman talks to a book. German restaurants dissolve into empty lots and surf clams teach life lessons. His magic touch shines a stark beam into our lives which illuminates both the pains and pleasures of growing older, of discovering more than we knew was there or perhaps wanted to know....

Scott Withiam has been a recipient of the Ploughshares Cohen Award, and the Two Rivers Review Chapbook and Drunken Boat Pan-Literary prizes. His first book, Arson & Prophets, came out with Ashland Poetry Press. Recent poems have been published by Agni, Antioch Review, Beloit Poetry Journal, Diagram, Ploughshares, Plume, and elsewhere. He formerly taught college writing and presently works for a non-profit in the Boston area.

Doors Out of the Underworld (Paperback)