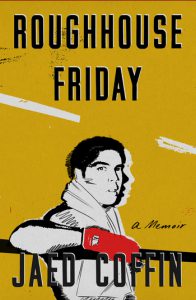 Join us for a conversation between Jaed Coffin and TBD to discuss Coffin’s new book Roughhouse Friday.  The conversation will be held on Wednesday, June 26th at noon in the Rines Auditorium.

About the book
While lifting weights in the Seldon Jackson College gymnasium on a rainy autumn night, Jaed Coffin heard the distinctive whacking sound of sparring boxers down the hall. A year out of college, he had been biding his time as a tutor at a local high school in Sitka, Alaska, without any particular life plan. That evening, Coffin joined a ragtag boxing club. For the first time, he felt like he fit in.

Coffin washed up in Alaska after a forty-day solo kayaking journey. Born to an American father and a Thai mother who had met during the Vietnam War, Coffin never felt particularly comfortable growing up in his rural Vermont town. Following his parents’ prickly divorce and a childhood spent drifting between his father’s new white family and his mother’s Thai roots, Coffin didn’t know who he was, much less what path his life should follow. His father’s notions about what it meant to be a man—formed by King Arthur legends and calcified in the military—did nothing to help. After college, he took to the road, working odd jobs and sleeping in his car before heading north.

Despite feeling initially terrified, Coffin learns to fight. His coach, Victor “the Savage,” invites him to participate in the monthly Roughhouse Friday competition, where men contend for the title of best boxer in southeast Alaska. With every successive match, Coffin realizes that he isn’t just fighting for the championship belt; he is also learning to confront the anger he feels about a past he never knew how to make sense of.

Deeply honest and vulnerable, Roughhouse Friday is a meditation on violence and abandonment, masculinity, and our inescapable longing for love. It suggests that sometimes the truth of what’s inside you comes only if you push yourself to the extreme. 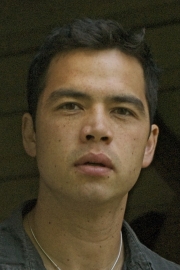 Jaed Coffin is the author of A Chant to Soothe Wild Elephants, a memoir about the summer he spent as a monk in his mother’s native Thailand, and the forthcoming Roughhouse Friday, which chronicles the year he won the middleweight title of a barroom boxing show in Alaska. Recently, Jaed has served as the William Sloane Fellow at Bread Loaf Writers Conference, a Resident Fellow at the Island Institute in Sitka, Alaska, and the Wilson Fellow writer in residence at Deerfield Academy. Jaed has lectured widely at colleges, universities, and secondary schools across the country on topics of diversity, creativity, and identity.

A regular contributor to Maine magazine, he also serves as the president of the board for the Maine Writers & Publishers Alliance. Jaed teaches nonfiction at the Stonecoast MFA in Creative Writing Program at the University of Southern Maine, and he also teaches regularly at Bowdoin College and in the University of Maine system. He currently lives in his hometown of Brunswick, Maine, with his wife and daughter.

An Important Update For Our Customers

1) Sanitizing common surfaces: We are currently sanitizing all phones, keyboards, registers, doorknobs, etc at least twice a day and generally more often than that.

2) Sanitizing ourselves -- All staff are encouraged to wash their hands or use sanitizer consistently throughout their shifts. We have a solid stockpile of hand sanitizer and gloves that are readily accessible to staff in all work areas.

3) Encouraging anyone that feels ill to stay home.

Second -- we understand that there are some of you right now and maybe more as the weeks go on, that may feel uncomfortable coming into downtown Portland at this time -- for books or multiple other needs. To that end, we are eliminating all shipping fees immediately if requested. Our normal shipping fees are $6 for the first book and $1 for each additional book. However, for the time being, that fee will be waived if you feel that the financial hardship of shipping costs would prevent you from ordering books from us. Our goal is to ensure that you can still get the books you want from your local bookstore whenever you need them. As a reminder, if you call us before 11 AM we can get most books delivered to the store within 2-3 business days. We would then need to ship them to you, but we are more than happy to do so.

The shipping fee will be waived as a default, but if you feel you are financially able to help with the cost of shipping, please let us know as that will help support this overall effort of ensuring the communities' needs are met.

NOTE: This does not apply to any rush shipping -- unfortunately we will need to continue charging for those. As always, we are all in this together. So we’ll sign off with a slightly different message this time…